On Valentine’s Day, Yelp announced that they had open-sourced Yelp Love. What is it? In their own words:

Encouraging positivity has been a central pillar to Yelp’s culture from the beginning. If a teammate rolls out a huge feature, helps you out in a bind, or just makes a funny joke, we believe you should be able to show them a small token of appreciation. That’s why we developed an internal tool called Yelp Love, a web application for sending notes of appreciation (aka love) to your coworkers within Yelp.

Having spent some time working at Yelp, I can say that this isn’t just marketing speak. We use Yelp Love all the time, whether it’s to thank somebody for their help, congratulate them on an achievement, or compliment them about something they do well. It feels great when you realize that someone has taken a little time out of their day to let you know they appreciate you, and it feels just as good to tell somebody why you think they’re great as well. Yelp Love has done a great job of creating a positive culture at Yelp, which I really appreciate. So when I saw that Yelp had open-sourced Love, it was 24 hours or less until I had a version up and running for my school, Case Western Reserve University. 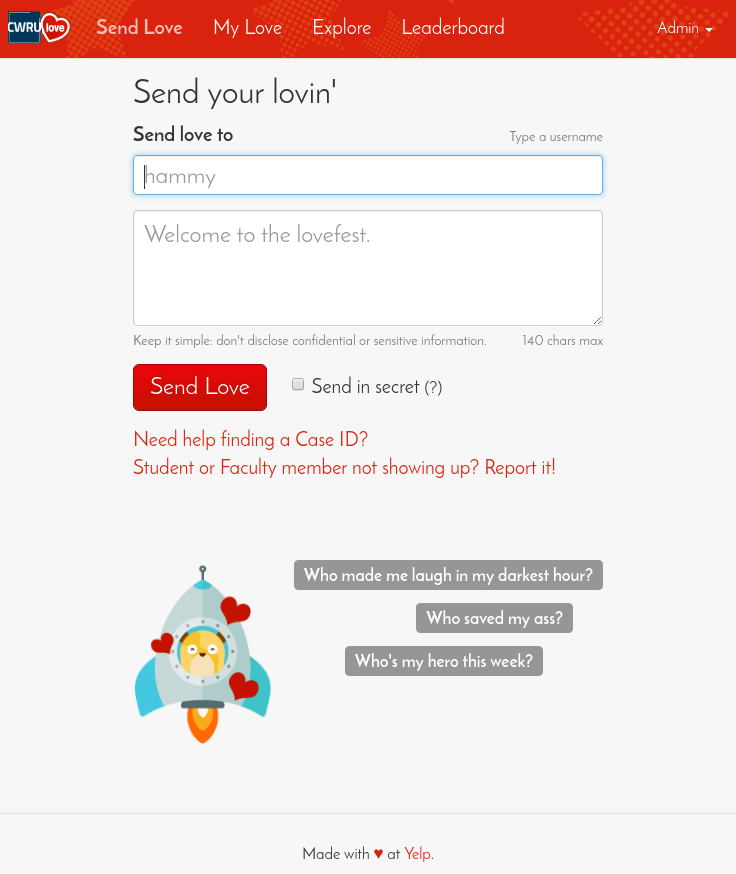 Any company can decide that they want to drop some code onto GitHub in order to get some good vibes from the open source world. That’s easy! But it’s much harder to actually create an open source project: one that’s easy for others to use, accepts improvements from the community, and provides some level of support for its users. Yelp has the beginnings of a great open source project here! Setting up CWRU Love was pretty easy: one Google App Engine free trial and a few commands were all it took to get things started! I did run across a few snags as I set things up, but between me and the Yelp employees maintaining the project, we were able to fix them and prevent them from happening in the future.

The hardest part of setting up CWRU Love has been entirely unrelated to the code itself: you need to have a complete list of names and IDs for students, faculty, staff, and alumni in order to fill up a database and let them send love to each other! Getting this list and making it accurate and complete has been rather difficult, but I was able to pull it off. Thankfully, even if I missed a few people, adding them is a one minute change I can make even from my phone!

Thanks to Yelp’s work, getting set up was the easy part. The hard part remains: building a culture of positivity and encouragement here at CWRU. To some degree, this means getting adoption from users, like tech startup with a “brand new” web app idea. But unlike those, this isn’t about money, nor is it about “becoming the next Facebook/Snapchat/whatever.” This is really just about giving people the opportunity to encourage and build each other up. So rather than having the whole university join and send one love for fun, I’d be happy with just a few users dedicated to brightening up the lives of others every day.

So if you’re a student, employee, or recent graduate of CWRU, please take this opportunity to spread the love! Don’t send me any; instead tell a friend why they’re awesome, a professor why you appreciate them, or a classmate why they inspire you. That’s what I want CWRU Love to be about!